You may find it strange that this post seems to invite freelance translators to stop worrying because ‘it’s better late than never’. Freelance translators always have some deadline that should be respected at all costs. However, this blog post is not about such deadlines. Rather, it is about the deadlines we set to ourselves, according to popular beliefs and the latest trends.
These deadlines usually go like this: we have to have finished university by the time we reach [certain age]; we have to get a real job by the time we reach [certain age]… and so on and so forth. Some people are actually building their lives around these beliefs, without paying any attention to what they truly want. That’s what leads, in my opinion, to the so-called mid-life crisis: you enter the rat race, you keep up with the Joneses in terms of life decisions and one day you wake up, half of your life has passed and you wonder: did I really want this?
I saw a very nice film recently, and its last lines reminded me of something that had happened to me when I was a kid:
When I was eight years old, some people from the Ministry of Education came to our school to inform us about a certain sports contest that was to take place the following Sunday. As it seemed, they wanted to discover whether any kids with tremendous aptitudes (athletically speaking) could be found among my classmates and me.
I was helpless at sports. I was precocious in Greek and English; I was very good at math and music. But I was really, really helpless at sports. Even today, I can’t understand any kind of sport; I am not able to comprehend the rules to save my life. But the authority of these people hinted that it was obligatory to show up.
I had to show up.
Even now that I am writing these lines I can clearly recall how terrible I felt standing among my classmates in that field on that chilly morning and preparing myself… well… to run a race. Okay, let’s do it, I told myself. I started running and my stomach ached from the effort. Oh dear. After a while it was impossible to go on. So I began to walk away, when suddenly a young gym instructor appeared to my side.
She said: “You have to finish. It doesn’t matter if you finish last, what really matters is to finish”. She even ran with me, at my side, encouraging me to go on. No other teacher had done something like that for me before.
I finished last. My name was actually written in a list which was pinned up at school for everyone to see. It hurt so much! But after all these years, I feel that on that Sunday morning the only kid that actually learned something from the whole experience was me. It became obvious to me that it doesn’t matter at all if you finish last, what is important is to finish.
There are a few things that I did ‘late’ in my life, and many things that I haven’t done yet. For example I got my second degree much later in life and at that age I became a translator as well. It doesn’t matter at all if I have started late. The satisfaction I get from my profession is enormous. Instead of spending my time regretting, I chose the path of ‘better late than never’. And regarding translation as a profession, I think it is not so bad after all to have started a bit later. So, if you have some wild dream, consider whether it falls in the category of ‘better late than never’, and go for it!
“No, what matters is to finish it. Films have to be finished, even if you do it blindly.”
─Mateo Blanco (Lluis Homar), Broken Embraces

Before getting started with today’s blog post, I just wanted to quickly mention a recent post I was featured in. Over at the Balance Your Words blog, Sara has started a great new series entitled ‘What’s on your desk?’ that gives translators out there a little insight into their fellow professionals’ quirks and working habits and I was lucky enough to be the first translator featured. Be sure to check out the upcoming posts. 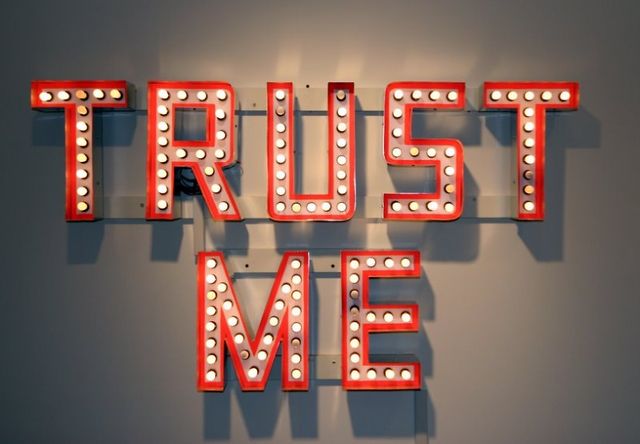 But now it’s time for today’s main course and I want to look at something that has a part to play in every single translation project out there – the issue of trust (I guess the title and the huge flashing image to the right give it away somewhat).

Traditionally, there is a widespread air of mistrust surrounding the translator – this wily, shadowy character who lies between cultures, hides behind their computer screen…